My textbook has a lesson on building towers of pennies and looking at the proportional relationship between the number of pennies and the height of the tower.  It is a good textbook lesson, but I decided I wanted it to be more organic - you know, in a planned out, calculated sort of way.  Inspired by all of the wonderful 3 Act Tasks out there, I came up with this plan.

Act 1
My kids made some penny towers.  After showing this clip to my class, I will have them write down any questions that come to mind.

*I am having editing issues.  Save your ears and keep the volume muted.*

I am confident that at least one question related to penny towers will require proportional reasoning of some kind and hit the target of: "I can make a prediction by using proportional reasoning in more than one way."  However, I had my kids do a little acting to create this video to really open up the discussion.

Depending on the questions students come up with, we will start by focusing on questions related to the height of the towers.  It could go in 2 directions, how tall is a certain number of pennies or how many pennies to reach a certain height.  Ideally I would like to explore both of these, and I don't think it is going to matter which one we start with.  Whichever question we start with, the second may become the sequel in Act 3.
In Dan Meyer's explanation of 3 Act Tasks, I like how he asks students to think of a number that they know is too high and one that they know is too low.  We work a lot on number sense in 7th grade and being able to engage that type of thinking is important.  I want to be sure to work this into Act 1.

Act 2
At this point, it is my understanding that I ask students what information they need from me.  I will have pennies, rulers, and the duck (11.5 cm) available.  In the video we do not have a million pennies, though I found some resources to show that in case we need it: The MegaPenny Project and Holocaust Memorial.

Act 3
If my understanding of the 3 Act Task is correct, this is where we pull it all together.  We will discuss strategies, formalize our understanding of how proportional reasoning was used, determine the answer, and of course go back and check our original estimates and see how we did.

________________________________________________________________________________
Reflections after this Lesson:
I was surprised by my students surprise at Act 1.  It was very clear to me that while we are making gains in getting the students more involved in their own learning, they really expect the teacher to place the problems/task to solve in front of them.  In my house television is not a spectator sport.  We tend to watch tv and movies with our phones because there are so many things we wonder and want to look up while watching.  I thought the questioning after the video would be natural.  It wasn't.  At first only a few wrote down questions.  I gave more think time and most of them came up with something.  One of the questions a student had after watching the video was, "Why are we doing this?"  Even though I did intro the lesson and went over the learning targets, these students had never been asked to do something like this before.  I, of course, was glad to go into the pedagogy of curiosity and questioning being keys to meaningful learning.  Perhaps next time before the video I would let them know I am just curious what things come to mind, what questions they have, what they are curious about as they watch the video.

I do need to work on their questioning skills.  If I am going to create lifelong learners, I need them to be lifelong questioners.  My plan is to create a Desmos activity that shows a picture.  They will write a question that comes to mind when they see the picture.  Then students can see others responses and I would have them tell me which question intrigues them the most.  There are other online tools that I could use for this, but we use Desmos already and I don't want to have to introduce a new resource.  I will share this activity when I create it.

With the questions student had in Act One we were able to move forward to Act 2 trying to determine how many pennies it would take to make a tower as tall as the duck.  We also investigated my kids' question about the million pennies.  Overall it went well.  We did pause to come to a class agreement on the height of the duck (which I had students measure themselves) and how many pennies are in a tower 1 cm tall.  I figured it would make the strategy discussion go more smoothly if we were consistent with those.  Doing this activity at the beginning of the year, I quickly realized that these students are not yet clear on my expectations for organizing work. As we put their work under the document camera to compare strategies we were also able to discuss representing mathematical thinking so others can follow our thought process on the paper.  I hope to do some 360 math in my classroom this year to strengthen this ability.

After Act 3 I used Recap to have students explain their understanding of proportional relationships referencing the penny towers as an example.  They were a bit self conscious about being videotaped, which they will get used to.  Some came up to me after class to let me know that they understand proportional relationships but had a hard time putting into words.  This just reinforced for me why a tool like Recap is important.  There is a difference between writing an explanation and speaking an explanation.  It made me think of the book Launch.  When students know their work will be put out there for others it takes it to a different level.  These videos were just for me, but they were far more invested than if I had just had them write down their answer.

Have you read Tracy Zager 's book Becoming the Math Teacher You Wish You'd Had ? If not you definitely should.  After reading it th... 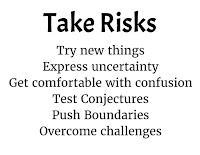